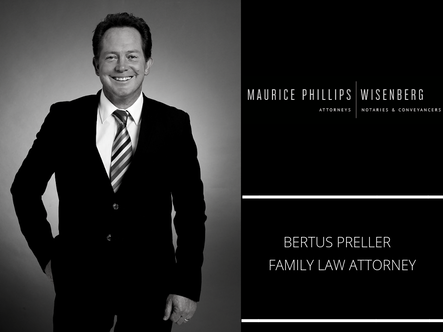 Bertus Preller is the founder of FMS he is an experienced Mediator accredited by the South African Association of Mediators (SAAM), Family and a Divorce Law Attorney at Maurice Phillips Wisenberg, in Cape Town.

Bertus studied at the University of the Free State and the University of Johannesburg and was admitted as an attorney in 1989. He has nearly 25 years of experience in law and  became a Mediator and Arbitrator during 1996 when he was appointed as a Part-time Commissioner at the CCMA. He specializes in Family Law and Divorce Law and attends to divorce and family law cases across South Africa. Bertus is the author of Everyone's Guide to Divorce and Separation, published by Random House.

He has also been quoted on Family Law issues in various newspapers such as the Sunday Times and Business Times and magazines such as Noseweek, Keur, Living and Loving, Longevity, Woman and Home, Women's Health, You, Huisgenoot and Fairlady and also appeared on the SABC television show, 3 Talk, Morning Live and on the 5FM Breakfast show with Gareth Cliff. His clients include artists, celebrities, sports people and high net worth individuals. In 2006 Bertus also launched South Africa's an on-line internet DIY Divorce platform iDivorce.